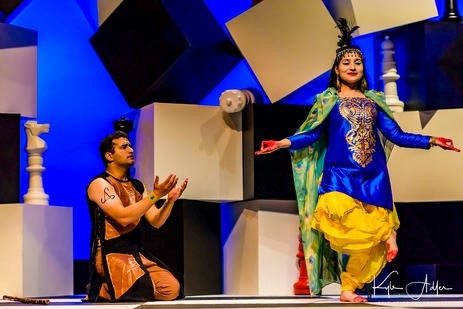 Naatak Theatre Company’s 65th production was an ambitious adaptation of Mahabharata, one of the two great epics of India. Longer than the Iliad and the Odyssey combined, it spans generations over centuries and encompasses every experience known to man.

The sheer vastness of the Mahabharata makes it a challenge to present in any form other than text. Multiple text versions exist, of varying lengths, apart from 3 hard-bound volumes of Amar Chitra Katha’s telling of the epic for children, edited by Anant Pai and illustrated by Dilip Kadam. There is a condensed single slim volume by C Rajagopalachari, and the more recent two-volume Mahabharata by Ramesh Menon.

In an engaging video interview, director Sujit Saraf speaks of the versions he read and used for Naatak’s “Mahabharat”.  He mentions Gita Press editions in Sanskrit and in Hindi, Kisari Mohan Ganguly’s version (late 1800s) and Rajagopalachari’s version (1950s) as his sources.

At the Cubberley Theater in Palo Alto, California, Saraf introduced the play with the salutation from the beginning of the Mahabharata.

“AUM, I bow down to Narayana, the most exalted Nara,

and to the Devi Saraswati, and say Jaya!”

The script, as well as the lyrics to the songs, were written by Sujit Saraf.  The rhyming narrative is an impressive achievement and clearly a labor of love. It is pleasing to the ear and is enhanced further by the exquisite, virtuosic music by Nachiketa Yakkundi and his splendid group of musicians.

During the closing credits, the musicians were greeted with the most resounding cheers.

In written versions of the Mahabharata, before we get to the Pandavas and Kauravas, there is a long preamble that describes who was born of whom which eventually leads to the birth of the main characters. In the play, this is presented beautifully in an opening song and dance sequence. We see the birth of Bharata (for whom India was named) born of Dushyant (Karan Khokar) and the enchanting Shakuntala (Ishani Pandya).

And then onwards to the birth of Devavrata, of King Shantanu and the River Goddess Ganga. We see Devavrata’s vow to forever remain a bachelor to remove any barrier for the children of Satyavati, his father’s new wife, to ascend the throne. For this, he is named “Bheeshma”: one who has taken a terrible oath. Then, from Satyavati’s daughters-in-law, sired by the Sage Vyasa poet of the Mahabharata, are born Pandu, father of the five Pandavas, and blind Dhritarashtra, father of the 100 Kauravas. All this is conveyed in a brisk 10-15 minutes, with live music and captivating dancing in three different styles:  Bharatanatyam, Kathak and Kuchipudi.

The first half of the play showed the Pandavas marrying the fire-born Draupadi (more demure than fiery as played by Tannistha Mukherjee), and losing everything at the infamous game of dice.

After enduring years of banishment, they spend a year incognito as agreed before returning to claim their kingdom.

Bheema is played by Chinmay Vaidya who brings out his natural comedic skills when he lies down pretending to be Draupadi so he can entrap Keechak. He is fearsome when he fulfills his pledge to kill Dushasana later in the play. Yudhisthira, Arjuna, Nakula and Sahadeva (Ritwik Verma, Harshavardhana, Bhavya Shah and Shubham Nigam) are engaging as themselves as well as the characters they play in King Virata’s palace.  Arjuna-as-Brihannala the dance instructor blends in perfectly with his wards.

Roshni Datta, clad in yellow and blue, draped in peacock feathers, was a captivating Krishna, playful at times, profound at others. In an extraordinary and brilliant scene, she embodied the heart of the Mahabharata, the Bhagavad Gita, as Krishna reveals his Vishwarupa, form of all worlds, to the faltering Arjuna on the battlefield, uttering the celebrated words:

“Whenever virtue subsides and wickedness prevails, I manifest Myself. To establish virtue, to destroy evil, to save the good I come from Yuga (age) to Yuga.”

The scene captures the transcendence of the Gita: the heart of Hindu philosophy is shown brilliantly for a few moments.

The battle begins, and there is terrible bloodshed. On one side the Pandavas, on the other the Kauravas: Duryodhan (Nalin Gupta), Dusshasan (Dhananjay Motwani), Karna (Dipesh Jagwani), Drona (Anitha Dixit), Bhishma (Anup Upadhye).  Millions die.

The dancing allowed colorful depictions of critical scenes, achieving on a small stage what BR Chopra’s serialized Mahabharata depicted onscreen with thousands of people. The war scenes are captured beautifully through the tension of the music, the fearsome eyes, drumming feet and blood-red costumes of the talented dancers.

The casting was inspired, with women playing many male roles in addition to that of Lord Krishna. As Saraf mentions in his video interview, this was partly out of practical considerations and enabled roles for many of Naatak’s fine female actors.  Deepal Pandya as Vaishampayana narrated with flair. Monica Mehta Chitkara was fittingly creepy as wily, cunning Shakuni and Preeti Bhat shone as Lord Indra.

Karan Khokar is fiery as the young Abhimanyu, who knows how to enter the chakra vyuha, the wheel phalanx / formation, but not how to get out of it. 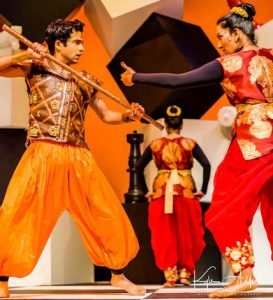 The scene of brave Abhimanyu trapped inside the Chakra Vyuha, courageously holding his own against the enemy, as the circle of dancers forms an impenetrable boundary around him, is stunning. The young prince is finally killed by treachery and the sight of his still body is wrenching.

The set design is simple, with several large cubes, and chess pieces placed on them at varying angles. Black, white and red. Chess has its origins in India, and a variant of it was played with dice, perhaps a version used by Shakuni whose loaded or magical dice wreaked destruction on the Pandavas and all the world. We are all pawns in the games played by the gods, one could say.

Ghatotkacha, Bhima’s son with the rakshasi Hidimbi, is imagined by a row of warriors who look at his body implied to span the stage. While this was effective, it might have been interesting, I thought, if shadow puppetry or a video projection (as was used so effectively in an earlier play by Naatak, Toba Tek Singh) was used to bring some of the demons to life. 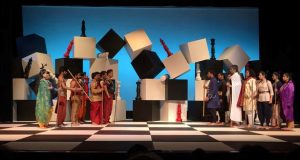 Towards the end, rows of pots bearing the remains of the 100 Kauravas lined the stage, a poignant reminder of the mass destruction that swept the earth, as Dhritarashtra (Rishi Chawla) and Gandhari (Rajul Banthis) mourn their loss with Vidura (Pooja Sabharwal) standing by.

The war was fought at the cusp of two ages, the dwapara yuga, and the kali yuga, to rid the world of kshatriyas who had grown arrogant and were destroying the world. It crossed my mind that perhaps the kings of those times were wiped out to clear the way for women to rule the earth. A Stree Parva that is yet to come will be a story of women, not weeping over their dead children and husbands, but governing a world with peace, prosperity, justice, and equality.

The play runs at the Cubberley Theater until September 23.

The original, more detailed, version of this review can be found at www.rajiwrites.com