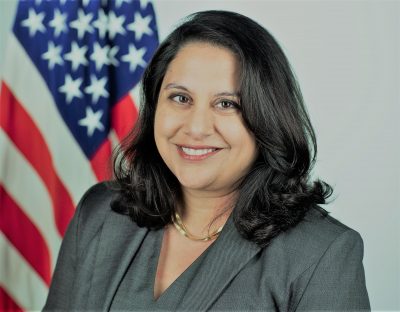 US President Donald Trump during a Diwali celebration announced he will nominate Indian American Neomi Rao for a seat which was earlier occupied by the present Supreme Court judge, Brett Kavanaugh.

“I just nominated Neomi to be on the D.C. Circuit Court of Appeals, the seat of Justice Brett Kavanaugh,” said President Trump during a Diwali ceremonial lighting of the Diya celebration, held at the Roosevelt Room of the White House,  Tuesday, November 13.

He said the plan was to announce tomorrow but he made this today.

“I thought it was an appropriate place,” the President said, “So, we’re 24 hours early, but she’s going to be fantastic.  Great person.”

The D.C. Circuit is the second most important court in the country, which has jurisdiction over important regulatory, national security, and separation of powers questions.

The position on the federal court opened up after the exceptionally controversial nomination fight over Kavanaugh.

As the administrator of the Office of Information and Regulatory Affairs (OIRA), Neomi Rao, 45, is called the ‘regulatory czar’ of Trump administration and oversees implementation of the Administration’s deregulatory agenda and regulation-related executive orders.

She was confirmed by the Senate with a 54-41 vote in July 2017 to head the Office of Information and Regulatory Affairs and is known among legal circles as a highly respected administrative law scholar who has distinguished herself for her right-of-center views, media reports stated.

A former clerk for conservative Supreme Court Justice Clarence Thomas, Rao was recommended for the post by former White House counsel Don McGahn. According to Axios, a news website, “Trump was keen on Rao as he wanted to appoint a minority woman to Kavanaugh’s old job”.

Even as it remains unclear whether Trump is favorably disposed towards selecting her, a source told Axios that Rao did not leave Trump with a good first impression.

However, another source close to Trump, told that it seemed like Trump was reconsidering his initial judgement of Rao and may still pick her,” the website reported.

In recognition of her contribution in cutting down regulations, Trump had handed Rao a pair of gold scissors, which the president used to cut the red tape between two stacks of paper.

Rao has previously served in all three branches of the federal government, and before taking on her current role in the executive branch, she was associate counsel and special assistant to the president for the George W Bush administration.

She has been known for promoting separation of powers in the three branches of government.

Prior to joining the Trump administration in July 2017, Rao taught as an associate law professor at GMU, where she also founded and directed the Center for the Study of the Administrative State.

A graduate of Yale University and the University of Chicago Law School, Rao also worked in the private sector, in the international arbitration group of the London-based law firm, Clifford Chance LLP.

She has also won accolades for her work with former OIRA administrator Susan Dudley saying that Rao was “an excellent choice to lead OIRA…In addition to a sharp legal mind, she brings an openness to different perspectives and an ability to manage the competing demands of regulatory policy.”

Born to Zerin Rao and Jehangir Narioshang Rao, both Parsi physicians from India, Rao grew up in Michigan and did her schooling from Detroit High School. She is married to Alan Lefkowitz and the couple has two children.