TiE Silicon Valley, a nonprofit dedicated to fostering entrepreneurship mainly the Indian American community globally, has been the target of allegations of sexual harassment by a highly respected woman entrepreneur and philanthropist who has taken to social media, saying “TiE SV has not taken any action yet.”

But TiE SV (The Indus Entrepreneurs) told indica that to the contrary it has formed a committee that is looking into the matter.

“TiE does not tolerate bullying or harassment of any kind and this complaint is being investigated into by a committee headed by Kanwal Rekhi,” TiE SV President BJ Arun told indica in an email. “I will not be able to make any comments until such time the committee has completed its investigation/reported its findings.”

Asha Jadeja Motwani, the widow of Rajeev Motwani who was a professor of Computer Science at Stanford University and was an early advisor and supporter of companies including Google and PayPal, on June 10, posted on Facebook allegations about TiE.

“Recently I reported a case of sexual bullying and harassment by a senior officer at TIESV – to TIE Silicon Valley, board members.

Warning: i will of course be taking legal action if the silence continues. I’ve been nice enough to wait for Tiecon 2019 to get over before pressing the board to take action.”

The social media post has shocked not only the Silicon Valley Indian American community but the TiE founders’ as well.

Asha Jadeja Motwani has not responded to indica’s request for comment.

“I am surprised to learn this and she says will bring the image of TiE down,” TiE SV co-founder Kanwal Rekhi said in response Motwani’s Facebook post.

“In any case, in my 30 years at TiE I have never seen and heard of such bullying. TiE does not condone or tolerate such bullying and TiE Board has asked me to head a group to look into it. Talat Hasan and Raj Jaswa are other two members of the group. Talat is a women entrepreneur and an early Charter Member of TiE and Raj is a past president of TiE SV,” Rekhi, said. 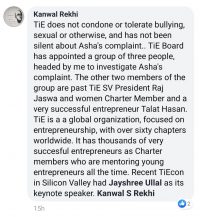 Rekhi told indica he feels very sad to hear these allegations from Asha who he and TiE hold in high regard along with her late husband, Rajeev.

Asha Jadeja Motwani, who earned a Ph.D. in political science from UC-Berkeley after doing her master’s and undergraduate studies in urban planning and civil engineering at the University of Southern California, at 2019 TiEcon had a daylong slot which she ran under the banner of Frontiers Exponential Technologies.

She is also an angel investor and philanthropist who invests in for-profit tech, internet and high social impact start-ups in the Bay Area, New York and India. She also serves as a trustee of the Motwani Jadeja Family Foundation, a charitable organization based in Palo Alto, California, and Ahmedabad, India.

Rekhi, who co-founded TiE SV 27 years ago, said he was in shock having learned the allegation and said questioned who would dare misbehave with such a highly respected woman as Motwani.

“Why would someone sexually harass her … again, such a powerful woman?”  Rekhi asked. “I don’t know the details and have asked Asha to meet us soon.”

Rekhi said he first heard the allegations formally from the organization’s board just before TiEcon, at which time he called for an investigation. He acknowledged that Motwani had sent an email earlier than the formal complaint.

He added that the organization is taking the matter seriously.

Rekhi said Motwani. wants to be added to the TiE board because it has no woman, and she alleges, “You all don’t treat women right.” Rekhi said she has a few demands, but allegations are still unimaginable nonetheless.

He told indica to be a board member one has to be an active TiE member, volunteer, and be appointed, after a vote.

“I love TiE, and it’s the labor of love; and if it has 300 volunteers it’s because of love for TiE, so I don’t understand,” said Rekhi. 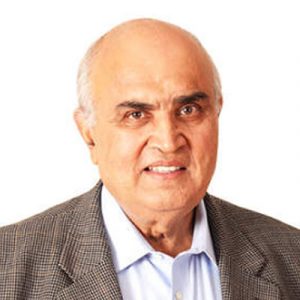 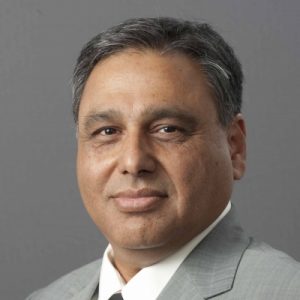