Sorry, my Indian brothers and sisters, I can't join your charade - Indica news

Indians are gloating over award of the Nobel Prize in Economics to Abhijit Banerjee.
So forgive me my countrymen for pouring some cold water over your heads.

Nobel Prizes are given every year in 6 subjects, physics, chemistry, medicine, literature, economics and peace. The first prizes were awarded in 1901. The prizes in the first 3 subjects, i.e. physics, chemistry and medicine are genuine and given to deserving persons. But those given in the other 3 subjects are often highly controversial and given to undeserving persons. For instance, peace prizes have often been given to war mongers like Henry Kissinger who advised bombing of Vietnam and Cambodia, which killed tens of thousands of people.

Of the 118 Nobel Prizes for Literature granted so far, no one would even remember the names of over 90 of the awardees as they were undeserving writers. Tagore, that British agent (see my blogs on him on my blog Satyam Bruyat), who diverted literature from the realist and revolutionary direction Sarat Chandra Chattopadhyaya was taking it, to mysticism and spiritualism (which is nonsense in a poor country like India) was awarded the prize, while Sarat Chandra, the greatest prose writer India has produced, and great poets like Faiz and Kazi Nazrul Islam, who deserved it, were not.

As regards the prize for economics, the less said about it the better. Economics was a genuine science when Adam Smith and Ricardo wrote on the subject, but later its writers were only prize fighters paid to defend the capitalist system. The Great Depression which broke out with the Wall Street Slump in 1929 showed that the capitalist system was no longer functioning as a self-regulating mechanism (the ‘invisible hand’ of Adam Smith) but was leading to increasingly destructive results. Keynesian economics was the substitute, but has it abolished recessions, poverty and unemployment in the world?

Amartya Sen and Abhijit Banerjee have been awarded Nobel Prizes for their work on poverty alleviation, but how much poverty have their theories alleviated? Have they any solution to the record unemployment, skyrocketing vegetable prices and farmers distress in India today? They have none!

So good luck to them, and happy hunting to our chest thumping Indian brothers and sisters, but I regret I cannot join your farcical charade and jamboree. 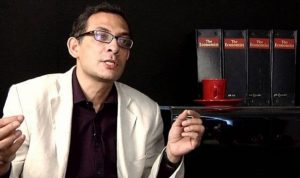