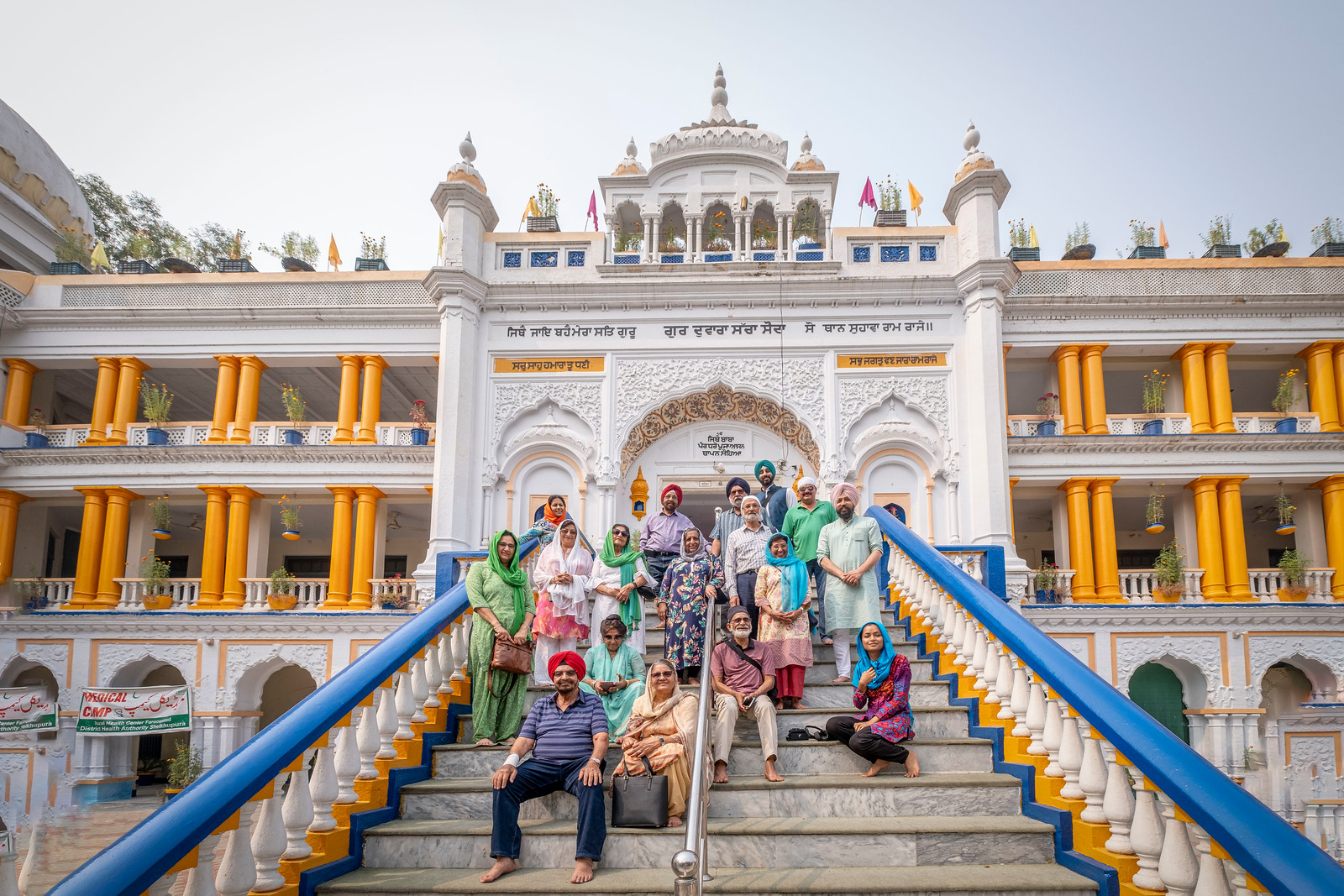 One of the significant contributions of Maharaja Ranjit Singh to the Sikh community is the construction of gurudwaras commemorating historical sites all over Hindustan. This singular act, I believe, has helped preserve the tangible memory of the Gurus.

He undertook the beautification and gilding of the Harimandir Sahib at Amritsar and Hazur Sahib at Nanded. Within his empire, he allocated vast tracts of land to gurudwaras, to ensure their maintenance and upkeep.

Even today, agricultural lands registered in the name of Baba Nanak are found in the official records at Kartarpur and other gurudwaras.

The walled city of Lahore is home to numerous sites rendered sacred by the presence of our Gurus. Gurudwara Dera Sahib, adjacent to the Qilla, marks the martyrdom of Guru Arjan Dev during the reign of Emperor Jahangir.

Guru Ram Das, the fourth Sikh Guru, was born in Lahore. The gurudwara, which marks his birthplace, is accessed after walking through narrow bazars of Chuna Mandi giving us a glimpse into the hustle and bustle of life of the inner city.

Travelling from Lahore to Nankana Sahib, the birthplace of Guru Nanak, we stopped at Gurudwara Sacha Sauda, where we were welcomed with rose petals. Today, Nankana Sahib is also home to the largest Sikh Pashtun community, many of whom have migrated from the North West Frontier Provinces, renamed Khyber-Pakhtunwa.

Interestingly, the Pashtun Sikhs did not leave their ancestral home during the partition in 1947, but sadly did so recently because of the looming threat of the Taliban in the region. Close to the main shrine are three other gurudwaras, associated with Guru Nanak’s childhood.

A 6-hour drive north to the city of Hasan Abdal, we reached Gurudwara Panja Sahib, associated with the hagiographic account of the encounter of Guru Nanak and Bhai Mardana with the saint Valli Qandhari. Touching the handprint on the boulder, believed to be of Baba Nanak, is a memorable experience for the faithful.

Babur, the founder of the Mughal dynasty, invaded Punjab in the 16th century and destroyed the town of Saidpur, later renamed to Eminabad. Guru Nanak was witness to the devastation and boldly writes about it in his composition “Babar Bani,” which is enshrined in the Guru Granth Sahib, the Sikh scripture. He writes-

Bringing the marriage party of sin,
Babar has invaded from Kabul,
demanding our land as his wedding gift, O Lalo…
…The Qazis and the Brahmins have lost their roles,
and Satan now conducts the marriage rites, O Lalo…
…The wedding songs of murder are sung, O Nanak,
and blood is sprinkled instead of saffron, O Lalo.

(translation from article by Haroon Khalid-Dawn)

Gurudwara Rori Sahib commemorates the Guru’s visit. It is built in a unique architectural style, using only brick work which reminds me of the work of the Spanish architect Gaudi.

Following the demolition of the Babri Mosque in 1992 at Ayodhya, India, many Sikh heritage buildings in Pakistan bore the brunt of reprisals that followed. The samadh of Bhai Vasti Ram in Lahore was torched and destroyed by mobs.

Guru Nanak spent the later part of his life farming and building his community at Kartarpur Sahib, till his death in 1539. The Gurudwara Darbar Sahib, situated within sight of the border with India, has been for decades “so near yet so far” for the community in India.

Recently, both Pakistan and India, in a rare and long overdue gesture of peace, have opened the “Kartarpur Corridor” to facilitate pilgrims visiting the shrine. We visited the shrine before the date of inauguration and were able to see the scale and speed of the work being undertaken by the Pakistan government. Roads were being built, domes installed, marble grinded, trees planted and landscaping in progress. It was a construction site in full speed.

The shrine itself, centrally placed amidst a huge marble courtyard, marks the site where Guru Nanak was cremated. Adjacent to it is a smaller canopy with a platform covered in an embroidered chadar (sheet), just as one would find in dargahs of Muslim pirs (saints). This beautiful co-existence of traditions is so in tune with the legend of Guru Nanak,

Is a Guru for the Hindu

And a Pir for the Muslim.

It is beautiful to have two memorials to him adjacent to each other, one in the Sikh tradition and the other in the Muslim tradition. While the Sikh monument has undergone a grand commemoration, the dargah still has a simple functional canopy.

For me this omission shows that somewhere we are missing the very point of Guru Nanak’s legacy. It is for the Sikh community to raise its voice, come together and honor Baba Nanak’s legacy by “upgrading” the dargah. The two memorials, side by side, one Sikh and one Muslim, is the essence of our Guru’s message, which transcends the barrier which religion has come to signify today.

Our guide, Mr. Shahid Shabir, shared with us that he and the surrounding Muslim community has been visiting this shrine for decades and also providing langar during gurpurabs (dates commemorating birth and death anniversaries of the Gurus). He rued the fact that Muslims were denied access to the shrine across the river Ravi in India at Dera Baba Nanak.

Sparingly, there are also a few sites associated with memory of women from history. A gurudwara commemorates the birthplace of Guru Nanak’s beloved sister Bibi Nanaki at village Chahal. Mata Sahib Kaur, wife of Guru Gobind Singh and memorialized as the “mother of the Khalsa,” was born in Rohtas Fort.  A small gurudwara, which appeared to be built recently, marks this memory.

The Sikh community, built on the strong foundations of the teachings of its Gurus, has survived and thrived despite repeated periods of persecution in its 550-year history. A quarter-million Sikhs were estimated killed by Mir Mannu, the governor of Lahore in the 18th century. A popular adage of the period records the emotions as below:

(“Mannu is our sickle, We the fodder for him to mow,
The more he cuts, the more we grow.”)

At the gurudwara “Saheed Ganj Singh Singhnian” in Lahore’s Naulakha bazaar, I was viscerally impacted with the tangible and visual memory of this sacrifice that is honored in Sikh prayer of “ardas” recited daily by the faithful.

As I was standing at the well and the basement in the compound of the gurudwara, and seeing the stone chaki (flour mill), a feeling of deep gratitude and humility swept over me for the supreme selfless sacrifices made by these brave mothers who choose to grind mounds of grain daily while wearing garlands of the dismembered bodies of their children.

The steadfast faith of 300 women like Bibi Subhagi and Bibi Lachi in the face of these unspeakable tortures is the reason I exist today. Their memory is worthy of commemoration in every way, but sadly they remain faceless and nameless.

Sacredness is also found in places, which necessarily might not have an outward religious symbolism but hold bitter truths to our face. The visit to Thoya Khalsa, a village in Rawalpindi, which witnessed the self-immolation of more than 70 Sikh women during the violence of 1947 was, for me, a moment of reflection and prayer. It also made me question social norms, which allocated family honor to women.

The Sikh faith has from inception been one of inclusion and respect for all religions. Visiting the shrines of some of the Sufi saints like Hazrat Mian Mir, a Sufi saint of Lahore who laid the foundation brick of the Harmandir Sahib and Sheikh Farid of Pakpattan whose writings are included in the SGGS, was an important inclusion in the tour itinerary. It was a unique opportunity to hear Qawaals sing in the most authentic version of their art.

In the town of Kasur, at Baba Bulleh Shah’s shrine, our group watched in rapture as Kathak Ustad Hajji Mirza Iqbal Baig rhythmically moved  in devotion to the kalam  –

The legacy of Baba Nanak continues to live in the 27 million Sikhs living worldwide as it does in the Nanakpanthi community, which has been the devoted caretaker of the gurudwaras in Pakistan, especially in the absence of the Khalsa Sikh community post partition.

It is also kept alive by the family of Bhai Mardana, the lifelong Muslim companion and rababi (musician) of Baba Nanak. His 17th generation descendants continue to do kirtan in the gurudwaras keeping this unique bond of interfaith association alive.

Pakistan and its people are the custodians of the land of the birth of Baba Nanak. Religious tourism can bring large crowds and huge revenues.  Catering to the comfort and needs of the pilgrims will put pressure on the administration to move fast. I hope they will be cautious and not become victim to unbridled “development” putting at risk the very structures that hold meaning for the pilgrims.

We owe it to ourselves and our future generations to preserve the original architecture of the gurudwaras and other sacred sites. Hopefully Lehenda Punjab will not go the way of India’s Charda Punjab, which has literally marbleized its gurudwaras leading to a bland uniformity of style.

To be continued in Part III