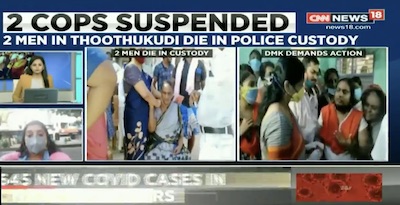 A father-son duo who were arrested for keeping their shop open during the lockdown for COVID-19 in Tuticorin district of Tamil Nadu died in judicial custody, and their kin have alleged that the father and son were sodomized by police personnel.

Jayaraj and Bennick were booked for not closing their cellphone shop in time June 19. Jayaraj died June 22 night and his son Benicks June 23 morning in judicial custody.

A Chennai-based news site, The Federal, quoted witnesses as saying that Jayaraj and Benicks were tortured and sodomized with steel-tipped batons June 20 and came out bloodied.

After the details emerged, shops in the district remained closed to protest against the brutality.

The family of Jayaraj and Bennicks have demanded that a murder case be registered against two sub-inspectors.

Madras High Court ordered that the post-mortems of Jayaraj and Benicks be video recorded. The court has asked for a report on the case.

Ruling AIADMK and opposition DMK Friday announced to give Rs 2.5 million ($33,028.1) each to the next of kin of the father-son duo.

The Tamil Nadu government too had announced Rs 1 million ($13,211.2) each to the families of Jayaraj and Benicks and government jobs to one family member of each deceased.

Tamil Nadu chief minister K Palaniswami said the two police officials allegedly responsible for the deaths had been suspended while the inspector of Sathankulam was kept under compulsory waiting.