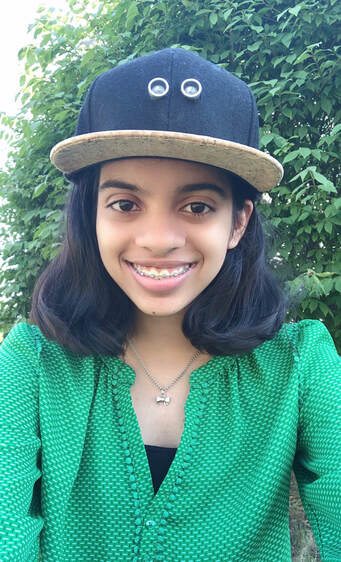 As the pandemic is still keeping the majority of the world indoors, parents along with their children are getting used to the new normal and are finding new ways to keep them occupied.

On a similar trend, a 15-year-old girl in the US decided to do something quirky and interesting and at the same time add a positive social change.

Neha Shukla from Pennsylvania’s Mechanicsburg developed a unique cap which helps users maintain safe distance from others amid the Covid-19 pandemic. She calls her innovation ‘SixFeetApart’ and has gained a lot of recognition and won a lot of appreciation for it.

Neha applied to the ‘Girls With Impact’ program in the United States that teaches entrepreneurial skills to young girls. The push for Shukla was the rapid spread of the disease and that fact that people could lose their lives because of a careless mistake, of not social distancing correctly.

Fitted with an ultrasonic sensor and microprocessor inside a cap, when worn it detects someone who approaches in the 6 ft radius of the person wearing. Then the device inside the cap begins to beep and vibrate to warn the user.

“I wanted to do something about it and I set out to create a social distancing device that utilizes ultrasonic sensors and microprocessors to detect when a person crosses that six-feet detection range and alert the user through vibrating and beeping,” she said.

With her interest in engineering and technology, Shukla began working on the device that would keep people six feet apart. And to make it useful, the 15-year-old chose a cap.

The cap beeps and vibrates when someone breaches the six-feet perimeter.

“It’s a microprocessor-based device that’s embedded in a hat. Whenever somebody crosses that six feet range, the program and the microprocessor are alerted,” explains Shukla while describing her device.

She adds, “On the inside, there’s an ultrasonic sensor, a microprocessor, a buzzer and a nine-volt battery. I coded a program that causes these ultrasonic sensors to send out these pulses (ultrasonic waves). Now, when these waves collide with a person within that six-feet detection range, this raw data calculation is converted to a system that it would understand and hence alert the user.”

Shukla was born and brought up in the United States. She started working on the project in April and a prototype was ready in June. Shukla is now working on improving the design of the device further to make it easier to wear. “I am also working on developing a Bluetooth app that will send the same notification to your phone as well and you can keep a track of that history,” she says.

She has been featured in the New York Times and on the Nasdaq screen last month. Shukla’s LinkedIn profile described her as a student, innovator, researcher and writer.

Shukla said that she would love to come to India as soon as the Covid-19 pandemic is over.