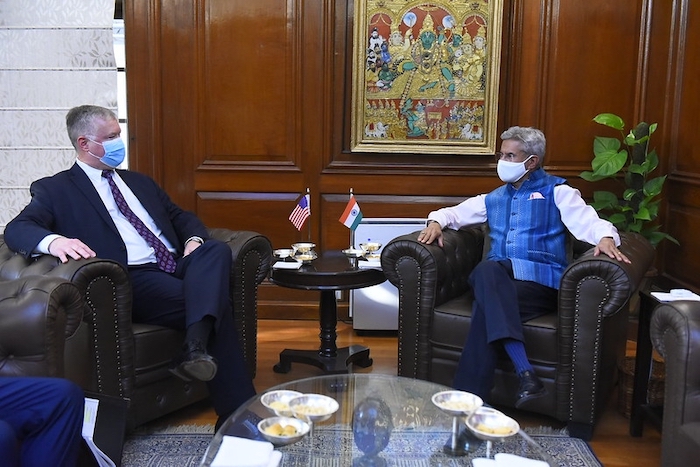 Deputy Secretary of State Stephen Biegun said Tuesday that he was optimistic that any possible outcome of the November 3 presidential election would not affect the deepening ties with India because “this relationship is much bigger than any one political party.”

Biegun, who had visited Indian last week for meetings with India’s external affairs minister S Jaishankar and foreign secretary Harsh Shringla, spoke to reporters by telephone from London on his way back.

“What leaves me optimistic is the longer-term perspective I have on the US-India relationship,” Biegun said.

“One of the constants in US-India relations has been that every presidential administration here in the United States has left the relationship in even better shape than the one it inherited from its predecessor and that is an amazing legacy.”

Asked by a reporter about the future of India-US relations in the context of the upcoming elections, he said that India has been immune to policy changes with different administrations.

“Oftentimes we can see international relations move with the political shifts here in the United States, but India has been a constant,” he said.

“There are many sinews that tie us together, and it leaves me confident that this relationship is much bigger than any one political party,” said Biegun, the second-in-command at the State Department.

“The United States and India, I think, face many of the same challenges in the world, so you also have, I suppose, what you might call the negative incentives that are driving us to make very sound judgments about our interests, but also lead naturally to collaboration,” he added.

Questions arise if having been critical of Prime Minister Narendra Modi’s Kashmir policy and under pressure from the party’s progressive flank they would prioritize Kashmir and related issues over other aspects of relations like the shared strategic interests with India if elected.

A Washington public policy expert, Anik Joshi, wrote in the influential Foreign Policy website: “A Biden administration is likely to take a tough stance if he wins the presidency this November — especially compared to the one under President Donald Trump and Secretary of State Mike Pompeo.”

He noted Harris’s criticism of the Kashmir policy and wrote: “Former Vice President Biden himself has also been willing to criticize Indian political decisions. On Biden’s ‘Agenda for Muslim-American Communities’, Biden stated that the ‘Indian government should take all necessary steps to restore rights for all the people of Kashmir’ and, further, that restrictions akin to the ones seen in the region weaken democracy.”

At his briefing Biegun said that his visit was “to talk about security issues and how we make sure that we do our utmost, working together, with a series of partners in the Indo-Pacific to promote a free and open Indo-Pacific that guarantees sovereignty and prosperity for the nations in the region.”

“And it was to take stock of and deepen US relations and set a course forward for how we can expand our cooperation in people-to-people areas, in various areas of government interest, including science and culture and medicine in particular,” Biegun added.

An important element that binds the two nations, he said, was “the democratic values that underpin both of our systems steer our systems in a certain direction that I think naturally converges US and Indian relations and interests.”

The COVID-19 pandemic has seen deepening cooperation between India and the US in action, he said.

“Shringla and I have maintained a steady engagement with a number of other Indo-Pacific partners on coordination around responding to the COVID-19 pandemic, and also sketching out how we recover from this pandemic,” Biegun said.

He cited the cooperation on developing and producing therapeutics and vaccines and said:”It’s just you have another element of a deepening US-India relationship.”

The two countries cooperated in ensuring that lifesaving medicines and personal protective equipment can be moved between them and in repatriating citizens who were trapped abroad when travel restrictions were imposed, he said.