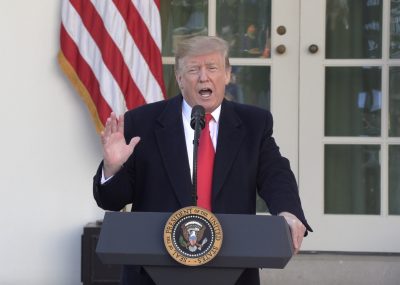 “Are they friend or foe?” On Thursday the President asked as he squinted into the distance north side of Raymond James Stadium in 87-degree Florida heat. Shortly before that, Florida Gov. was forced to interrupt his speech repeatedly in the same rally as medics rushed in and took care of people who succumbed to the heat. At least twelve people hospitalized after the rally, many more were treated for heat exhaustion. Continuing, the President asked the crowd to find out if it was a foe, and then “take care of”, as I heard it, “those sons-of-b…s”.  He was not talking about rabble-rousers, much less enemy combatants. They were Tampa firefighters who let loose a hose of water creating refreshing mist over the crowd, some of which may have fallen on the President, risking his ire.

To me, this sums up how lived his life from the Green Room to the White House.

His presidential campaign may have started as a way of generating more buzz around a very successful small-screen presence that was built on pretenses and blatant lies about his rather pathetic record as a real estate/casino/golf-clubs-and-resorts operator. He was fortuitous to collect a menagerie that included anti-incumbency, a fundamentally weak opponent, a sense of grievance against changing color of the country that he stoked with enough dog-whistles that would draw a coyote over the Rio Grande.

Everything about this Presidency is make-believe. The economic boom was hot-air, the president is a reality star with no substance to back up, his courtiers are there because they played one on TV before. And now, the President is asking us to take it that the pandemic and its effects are make-believe too. Thankfully, that charade is going nowhere. When you see your dear ones fumble under the spell, lie face down without a shred of dignity in a ventilator, feel within yourself the aftershock for months after being infected, the pandemic is no longer a hoax. When you are laid off and your benefits have run out, you wait for hours in a pantry line, you look at your children and wonder how you are going to bring a cheer in those faces at Christmas after nine months of being home-bound, the grumble in your stomach is more real than ticker-tape.

Interestingly enough, the one group of voters most disgusted by the pretense is the youth vote. They may be the people who are most screen-obsessed of any, and much of their attention goes into curating (multiple) online Avatars. But when it comes to voting and politics they are as real as you can get. They have seen first-hand how incompetence at the top can steal one year of their life. They have seen first hand how identities are ignored, even ridiculed, by the powers-that-be. They have witnessed pathological malcontent towards immigrants and people of color, who are future of the country no matter who you ask. Their protests against brutality and institutional racism have been mislabeled for the mistakes of a few, and protesters hounded like animals, by one side of the aisle and their Overlord with the bully pulpit. They have seen ritualistic chest-thumping at higher highs of the Dow, only to look away and realize they have no claim to the spoils. They have seen deliberate defunding and chiseling away of Obamacare that they depend on for coverage. They are too young to recall Dynasty on TV, but are horrified when the show reaches the People’s House they deem sacred ground.

Economy is not to be sacrificed in their eyes, au contraire. They celebrate success if it comes from entrepreneurship, e.g., defining or disrupting a market or an industry, especially with technology. Big tech, often vilified by both sides of the aisle, are a friend to them – large part of their lives is a collection of personas across multiple social media platforms and games. They are horrified at the current crop of business leaders shaping up Trump economic policy, if at all, representing coal, textile, oil, lending and such. These same industries remind them of sooted chimneys, poisoned water supply, destroyed ecological habitats. Insistence of current incumbents, coupled with their categorical denial of science-based observations about the environment, instinctively bring up horrors fifty years hence when current decision-makers are no more. They would rather have an economic policy that builds for the future that is cognizant of ecology, as in the Green Deal. In fact, costs of Green Deal are nothing compared to the tax cuts and other boondoggles for the top 0.01% as they see it.

I have been conducting my own, unscientific but reasonably comprehensive, survey of first-time voters across the nation. They are mostly young, people of color and immigrants, and they are, overwhelmingly, rejecting reaffirmation of last four years. In fact, a large of them have not voted yet, especially young voters. They are more interested in going over on, or close to, November 3 and make a statement. What they were doing for last few weeks is influencing older family members, and helping them complete mail-in votes. Among the 41.6 million early votes cast (31.7 million of them mail-in), I guesstimate no more than 1 million are from young voters.

Lessons of 2016 made us scared of “social desirability bias” as was alleged to have plagued all polling. This time, the bias is working the other direction. Young voters are completely “off-the-grid” when it comes to telephone canvassing, therefore, data are lacking for any back-test.  Many older people in my unscientific survey have been conditioned by their ‘grandchildren’ to respond a certain way if they pick up the phone, if only for fear of drawing unwarranted attention to their household.

America seems to have turned on the Don as he is sure to meet the Deep Blue.

I am not in the business of predicting election outcomes. As a first-time voter myself, I have a vested interest in seeing the country reflect the higher ideals that drew me to solicit citizenship. What I see is the desecration of the basic values of humanity, of principles and values that make the country a haven for the huddled masses, including yours truly. There is no future of America without us, and that is a fact. Same with the youth.  It is time the country reflects their collective dreams and aspirations. At the polling station. At the People’s House. At the halls of Congress. In their policies. In implementations.  Echoing The Economist, next President should “enter the White House with the promise of the most precious gift that democracies can bestow: renewal.”

[Partha Chakraborty is an Indian-born immigrant; a naturalized US Citizen since 2018. Educated in India and at Cornell University, Partha is currently an entrepreneur in water technologies, Blockchain and wealth management in the US and in India. The views expressed are his own].