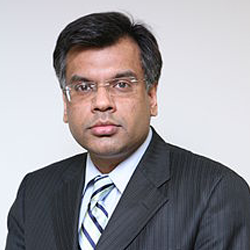 Dr Vivek Lall, who is well known in the Washington DC circle as the industry architect of the US-India relationship this century, was unanimously voted onto the board of the USJBC.

The relationship between the US and India has grown strength to strength in many areas, in the past decades. Especially in the defense sector, since the turn of the century, there have been more than $20 billion trade deals.

He is the Chief Executive (CE) of General Atomics Global Corporation based at their headquarters in San Diego, California.

Since the Indo Pacific strategy remains the number one focus of the Pentagon and the Department of State, Dr Lall’s joining the USJBC will further solidify the three-way US-India-Japan business relations. He was inducted, in October 2020, into the Global Board of Directors of the US –India Business Council (USIBC).

In January 2018, Dr Lall was appointed as Vice President of Aeronautics Strategy and Business Development at Lockheed Martin, which is considered to be the world’s largest defense company.

In May of the same year, he was appointed as a key advisory role for a two-year term to the US Cabinet Secretary heading Department of Transportation (encompassing entities like the Federal Aviation Administration) in Washington DC which affects the US and global aviation policies and technologies.

He has enjoyed bipartisan support for the last two decades from various US Presidents due to his experience in technology and trade.

Dr. Lall has he held numerous marketing and engineering leadership roles with The Boeing Company from 1996-2011. Later he moved up to become the Vice President and India Country Head for Boeing Defense Space & Security in May 2007.