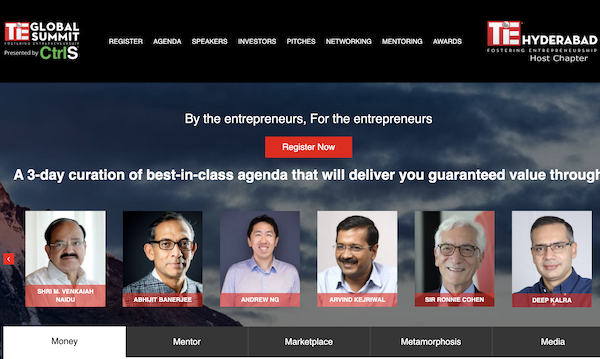 The summit aimed at fostering entrepreneurship has touched a record of about 50,000 registrations, a milestone in its history, the organizer TiE Global said.

The TiE is a Silicon Valley-based non-profit organization supporting startups through networking, and its Summit 2020 will be showcasing opportunities to get mega investments into India.

Vice President Naidu said that fostering student-entrepreneurship through innovation programs was critical and universities needed to establish close linkage with industries to mentor and handhold students with novel business ideas.

Addressing the TiE Global Summit 2020 through video conferencing from Visakhapatnam, Naidu asked the universities to set up incubation centers to tap and nurture entrepreneurial talent among youngsters.

He appealed to the corporate sector to come forward to fund and promote an entrepreneurial ecosystem on university campuses.

The Vice President also wanted a special drive to be launched for promoting entrepreneurship among women, expressing happiness that TiE has impacted 50,000 aspiring women entrepreneurs through mentoring.

Describing India as home to world’s third-largest startup ecosystem, Naidu quoted a recent Nasscom study that found about 50 percent of the country’s tech startups are confident of reaching pre-pandemic revenues.

“I am sure things would look up for all Indian start-ups in the near future,” he added.

Stating that with more and more young people joining the labour market, he pointed out that the world will need about a half a billion new jobs by 2030.

The Vice President called upon the established entrepreneurs and chambers of commerce, associations like TiE to mentor the next generation.

The Vice President was of opinion that good entrepreneurial ideas backed by talent will beckon investors, who will be willing to invest in early-stage entrepreneurs — not only in Silicon Valley, but in Hyderabad, Visakhapatnam or any other place where there is talent.

He expressed happiness that in this TiE Global event more than 300 mentors are available to show the ropes to young entrepreneurs across the globe.

Minister Gadkari said MSME (micro, small & medium enterprises) is the backbone for the Indian economy that contributes to 30 percent of the GDP, which he said the country would like to increase to 40 percent.

“Rural India has a huge potential,” he said. “But there is a crisis in terms of social, economic and educational [needs]. We need to develop more industries to generate more employment.”

Telangana state minister KT Rama Rao, who addressed the event, expressed his happiness to know that TiE would set up its global headquarters in Hyderabad.

He enlisted initiatives of the state in fostering entrepreneurship.

Sridhar Pinnapureddy, president, TiE Hyderabad, said the TiE Global Summit 2020 is the eighth in the series.

It will help 500 startups access capital and connect to the mentor network, he said.

The summit is based on the theme ‘Entrepreneurship 360’ and it will focus on issues faced and challenged by entrepreneurs, provide a platform for funding, insights into strategies to grow and scale business.