Ved Mehta, chronicler of India for the world, passes on - Indica news 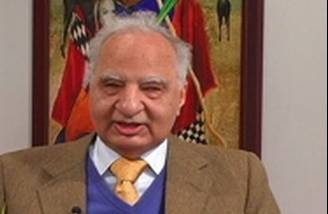 Indian-American novelist Ved Mehta, who shone a bright literary light of evocativeness and imagery overcoming his blindness, has died in New York at the age of 86.

The New Yorker magazine, where he had been a staff writer for 33 years, reported that he had died on Saturday.

Mehta provided the first introduction to India for many contemporary Americans through his popular books and articles that ranged from the autobiographical to the political and historic.

The prolific writer of 24 books and hundreds of articles lost his eyesight because of meningitis at the age of three but that was never a handicap as he navigated the world uncannily with his remaining four senses and did not use even a cane or seek assistance from anyone.

Mehta was born in 1934 in pre-Partition Lahore and educated in India, the UK and the US, which he made his home and became an American citizen.

His first book, Face to Face, a recounting of his early life that was published in 1957 and caught the eye of literary figures, launching his career as a writer and turning him away from a career of scholarship that he had initially set on.

He later published a series of autobiographic books, Continents of Exile, starting with Daddyji about his father Amolak Ram Mehta, a doctor whose regret was that he had not been able to save his son’s eyesight.

From Lahore, his father sent him to a school for the blind in what was then Bombay and later to an institution in Dehradun primarily for soldiers who had lost their vision in action.

During the bloody Partition of India, his family joined the millions fleeing to India from what became Pakistan.

Mehta sent off letters to various schools for the blind abroad and he was accepted by Arkansas School for the Blind in the US where he began studying in 1949.

He moved on to Pomona College in California for his bachelor’s degree and then to Oxford for another.

He returned to the US and received a master’s degree from Harvard.

His article on a visit to India was published in 1960 in The New Yorker and its editor William Shawn hired him as a staff writer.

Many of his books got a start as long articles at The New Yorker.

His writings at the magazine ranged from philosophy and politics to personal introspection and travel.

His career there ended in 1994 when Tina Brown took over and after that he taught at Yale and New York universities while continuing to write books.

Mehta’s books have vivid descriptions of people and scenes as if he had seen them, but based on his sensitive hearing and other senses.

There is an apocryphal story that the American novelist Norman Mailer did not believe that Mehta was really blind because of his colorful writing and had threatened to punch him in the face to see if he could see the oncoming fist and flinch.

Besides his autobiographical books that not only gave a portrait of his family but also of India under colonial rule and emerging from it, his other books, Walking the Indian Streets, Portrait of India and Mahatma Gandhi and His Apostles opened windows on India for American readers.

His autobiographical works included Mamaji about his mother, Shanti; All for Love, an introspective work on his psychoanalysis and his relationships; Sound-Shadows of the New World about his education at the American school for the blind; and Up at Oxford on his years in the UK.

Fly and the Fly-Bottle: Encounters With British Intellectuals, about his encounters with British philosophers, was one of his high-impact early books.

He also wrote a novel, The Delinquent Chacha.

The author of books on Indian politics, including A Family Affair: India under Three Prime Ministers, Mehta was a critic of both Prime Ministers Indira Gandhi and Narendra Modi.

In his book, The New India, he exposed Gandhi’s Emergency when civil rights were crushed and the media censored, while leaders opposing her were jailed.

“There is a sense of looming calamity here, a sense of danger,” he wrote of India under the Congress party’s dictatorship, but concluded that Indira Gandhi’s defeat in the 1977 elections were “the most hopeful sign in recent years for the growth of democracy in a poor country.”

At the 2014 Jaipur Literary Festival just before Modi’s election, he said that if Modi were to come into office, it “will be a great danger to India because of his thinking differentiating between Hindus and Muslims.”

Mehta married Linn Cary, a descendant of the 19th century American writer James Fenimore Cooper, who survives him along with their two daughters, Sage Mehta Robinson and Natasha Mehta.