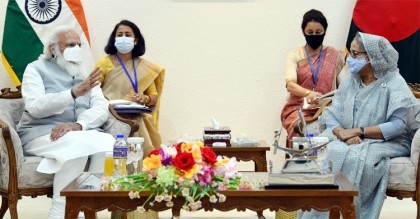 India on Friday gifted 109 ambulances and 12 lakh Covid-19 vaccine doses to Bangladesh, with Indian Prime Minister Narendra Modi handing over the keys of the ambulances to his Bangladesh counterpart Sheikh Hasina.

Bangladesh and India on Saturday signed five MoUs at a meeting held at the Prime Minister’s Office (PMO) in Dhaka. In addition, several projects were also inaugurated during the concluding day of Modi’s two-day visit to Bangladesh.

The Indian Prime Minister had arrived in Dhaka on Friday on a two-day visit to Bangladesh to attend the celebrations of the country’s 50th year of liberation from Pakistan and the 100th birth anniversary of its founder Sheikh Mujibur Rahman, the father of Sheikh Hasina.

On Saturday, Modi and Hasina also virtually inaugurated the ‘Mitali Express’, a passenger train between Dhaka and New Jalpaiguri in India.

The two leaders also inaugurated four projects virtually after witnessing the signing of the MoUs by representatives of the two governments at Hasina’s office on Saturday evening.

The Bangladesh Prime Minister welcomed Modi at her office at 5 pm where the leaders held a meeting involving senior officials of both countries.