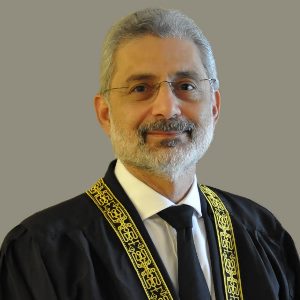 Justice Markandey Katju is a former Judge, Supreme Court of India, and former Chairman, Press Council of India. The views expressed are his own.

Nowadays one of the news emanating out of Pakistan is about Justice Qazi Faez Isa, a Judge of the Pakistan Supreme Court since 2014, who is in line of becoming the Chief Justice of Pakistan in 2023.

Justice Isa is known to be a very upright and independent judge.

However, his problem is that he has displeased the Pakistan army by his judgment in the Faizabad sit-in case of 2017 ( regarding the agitation of Tehreeke Labbaik over the election bill ).

In paragraphs 42-47, and 53(15) Justice Isa strongly criticised the ISI and the Pakistan army for meddling in politics, and ordered action against armed forces personnel who violated their oath of keeping away from politics.

Justice Isa has also said that judges and army officers are not entitled to plots of land:

Now it is well known that the real power in Pakistan is in the army. There have been several army coups in Pakistan and military rule, and even when there is an overt civilian rule, the army is always waiting in the wings to take over when it thinks it necessary or opportune. Pakistan’s judiciary usually surrenders before the army, e.g. when it sentenced Prime Minister Zulfiqar Ali Bhutto to death at the instance of Gen Zia-ul-Haq, or validated army rule under the devious ‘doctrine of necessity’. Power grows out of the barrel of a gun.

The Pakistan army is unhappy with Justice Isa for his comments and strictures against the Pakistan army and ISI, so it may not like him to become the CJP. To prevent that eventuality, it seems that the Pakistan President Arif Alvi was prevailed upon to make a reference against Justice Isa to the Supreme Judicial Council of Pakistan ( which deals with allegations against Judges ). The reference was found illegal and quashed by the Supreme Court, but the Court went on to direct the Federal Board of Revenue to enquire into certain property transactions of Justice Isa’s wife, and submit its report to the SJC.

Now fresh proceedings are going on against Justice Isa

One has to praise Justice Isa for his forthright views about democracy, media freedom in Pakistan, etc

One can only hope and pray he comes through his fiery ordeal stainless and unsullied. The Supreme Court has accepted his wife’s version about the property transactions.

But what will be the stance of Pakistan’s ‘deep state’? Only time will tell.