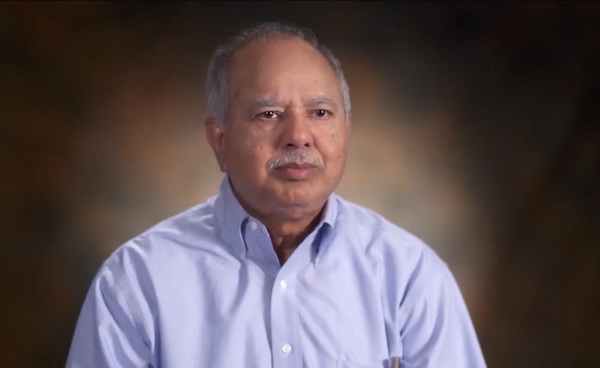 Professor Raj Reddy is a legend in the world of computing. He was the founding director of the Robotics Institute at Carnegie Mellon University. He has been honored with the Turing Award, known as the Nobel Prize of computing. He is known as the father of speech recognition technology, and renowned for his work in Artificial Intelligence and robotics.

So when such a man says a quantum computer is not coming anytime soon, you have to listen.

Professor Reddy spoke to indica News at length about a wide range of topics — from how he came to the United States to his new innovation, an app called “Guardian Angel” that he says would be just like god.

After completing his MEng in Australia, Reddy was looking for a job. He was not sure whether he should stay back or return to India, since finding a job for an immigrant wasn’t easy. He applied at several places but was not getting a response — until IBM hired him.

That, he said, changed his life.

“I applied there because I had some computer experience, which they were looking for. So they hired me, and it turned out that I was pretty good in computers and programming,” he said.

“It is not that AI was suddenly discovered 10 years ago,” Reddy said. “We were doing AI in the 1960s but it was [more of things such as the] computer playing chess and beating human beings. Then in the ’70s we had robots doing things — industrial use — and in the ’80s we saw the personal computer revolution but there was also the AI revolution called the ‘expert system.’

“There was a huge hue and cry that AI would be the next big thing and in 1980, there were three-four startups that were there; but then there was a period called the AI Winter.

“Now the demand has come because of the algorithm… the machine learning algorithm can take data and discover patterns that human beings cannot and therefore they were able to use that,” Reddy said.

“For example, right now, banks are using [AI] for fraud detection in transactions.”

He linked the surge in AI to surge in computing power.

“We had PDP1 [Programmed Data Processor-1], the first computer in Digital Equipment Corporation’s PDP series. It was first produced in 1959. The PDP10 and IBM 360 and those computers were not a billion times faster…. Today you have a smartphone which is more powerful than super computers 30 years ago,” he said.

“So, the reason AI has now taken off is because many of the algorithms we needed to study could not run [with the computers available then],” he explained. “In the old days even things like speech [recognition], which is now routinely used on phones, was difficult. We used to speak a sentence and wait for 10 minutes before you get an answer. And that was too slow and at some point, essentially, society became disenchanted with AI saying it’s a whole lot of bluff and nothing is going to work. So it was ignored it for 20 years.”

He added with a laugh: “But people like us kept on working.”

“We kept saying wonderful things will happen but when I say show me there is nothing to show,” he said referring to the buzz around a quantum computer.

“We are talking about it for the past 30 years but now again in the market there is just a buzz around it. Nothing will happen,” Professor Reddy said, voice dripping confidence.

Asked why, he said: “Because the difference between digital computational and analog is that everything you do in quantum computing is approximation. It is called analog computation but the important thing is quantum computer requires two devices that can do computing at the quantum level.

“Second, if I give you a problem, like a large amount of data, programming them into quantum computing — it cannot be done because we don’t know even how to begin; that is the truth,” he said.

Giving an example, he said that in the ’60s engineers were building computers called ILLIAC IV by UCIC, which was billed as one that would revolutionize everything but it was complicated to use and so no one used it.

“Same thing happened with semiconductor and silicon and germanium which has a much higher electron mobility that never took off, it is much harder to work with. It might be tomorrow’s technology but we don’t know,” he said.

“I can say AI will play an important role in cyber security but will it happen in one year or 40 years we don’t know,” he said.

Professor Reddy is excited about an innovation, his Guardian Angel app. One of its slogans is: “To get the right information to the right people at the right time in the right language and in right level of detail.”

“We call it the AI Bill of rights,” Professor Reddy said. “The question is how can a system get the right information to the right people. That means you have to know what is going to happen to every person and only god can do that. That is why we call it Guardian Angel.”

“With the Guardian Angel app, we can eliminate 99 percent of such deaths,” he said.

Explaining further, he said that if every person had a cellphone and could be warned in time, those deaths could have been prevented.

He admitted that such technology also raises questions about surveillance and privacy.

“So on one side if we knew something bad is going to happen a Guardian Angel can actually save you but at the same time in order for the Guardian Angel to have the knowledge to save you it has to surveil you,” he said.

“Here the problem is that human beings can hack in and find out what this Guardian Angel app is doing.”

He said: “It’s a complex problem, but again if implemented properly we can do good to a lot of people. Think like a god, like a machine who knows what would happen and save you — and it can be done.

“But again, if you think AI will solve all problems, that is not going to happen,” he said.

“The future of AI is to do that humans cannot do…. The important thing to remember is the human intelligence has evolved for millions of years and cognitive intelligence …some thousands of years ago and AI is less than 60 years old. We have a long way to go.”

China is doing much better than the United States on the technology front at present, Reddy said.

“But the India government is not investing [in technology],” he said. “India has to do a lot of things but unfortunately the bureaucracy and the way they organize essentially kills everything.”