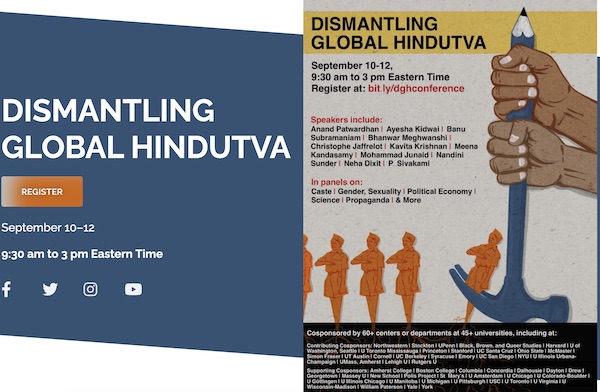 An upcoming conference on “Dismantling Global Hindutva” has led to outrage among Hindu advocacy groups in the United States who allege the event is meant to demonize Hinduism, while the organizers of the event maintain that Hindutva is a political ideology — different from the religion — that is destroying India.

The conference, scheduled for September 10-13, has lined up speakers from academia, journalists, and public intellectuals. The panels will cover a wide range of topics — from caste to gender and sexuality, to political economy, to science, and propaganda. The poster for the events says it is cosponsored by over 60 centers or departments of over 40 universities in the US.

In response to an email from indica News, the organizers of the conference said:, “We have invited experts to speak on these panels because we, too, want to learn from them and their expertise, and think alongside them on what Hindutva ideology is and does. People can register for the conference for free at https://bit.ly/dghconference.”

Hindu groups, on the other hand, have mobilized support and have reached out to universities to withdraw their sponsorship to the event.

Samir Kalra, managing director, Hindu American Foundation, told indica News that the HAF has urged the universities to “understand that their faculty irresponsibly and falsely labeling tens of thousands of people exercising their own right to free speech and assembly as ‘fascists’ and ‘supremacists’ is endangering an ethnoreligious minority in the US.”

Kalra said that the biggest concern is that the event is not an academic event that will include multiple viewpoints but instead be “a forum to demonize Hindus and Hinduism, and smear anyone they disagree with with the label of ‘supremacist’ or ‘fascist’.”

The event, Kalra said, will “provide a platform for activists with extensive histories of amplifying Hinduphobic discourse while actively denying the existence of Hinduphobia.”

He added: “In addition, we’re concerned for the wellbeing of Hindu students, staff, and faculty at each of these institutions. The recent example of Rashmi Samant being stripped of her position as student union’s president at Oxford University is an overt example of the harm this kind of political activism promulgated by scholar-activists can result in.”

Samant, who in February this year became the first Indian woman to be elected president of the Oxford University Students’ Union, was asked to quit amid allegations that she had put up insensitive social media posts in the past.

“But there is the more subtle impact — of silencing Hindu students or fomenting hostility towards them by portraying them as inherently bigoted and dangerous,” Kalra said.

“We heard from at least three universities —Dalhousie, University of Massachusetts, and Princeton — that they were not sponsors of the event and had requested removal of their names and logos. One said it was looking into it,” he said.

“Three logos, of the University of Pennsylvania, University of Washington, and University of California (UC Berkeley, UC San Diego, and UC Santa Cruz were listed) were removed by the event organizers, which we can only presume were at the behest of the universities. And now we’ve noticed that the conference website displays zero logos and only provides a list of university departments and centers,” Kalra said.

The conference hosts said they were worried about the backlash, but not surprised.

Asked about the reason for the conference, one of the organizers responded to indica News over email.

“Ever since the Hindutva-aligned BJP came to power in India, media all over the world, including top outlets in the United States, have documented the rise in violence against religious minorities and marginalized communities,” the organizer, who was not identified, wrote.

“The aggressive crackdown on all forms of democratic dissent, and the intimidation and imprisonment of journalists, human rights groups and activists working to empower marginalized caste and tribal communities has also been called out, including by the UN.”

The organizer continued: “Our deep concern at these events made us feel the need to organize a conference that would shed light on Hindutva and increase awareness on the history of the ideology, what it is doing in the present, and what it hopes to achieve in the future.”

The organizer said that they have been planning this conference since early 2021, and once they formulated the vision for this conference, they were joined almost immediately by departments and centers at prestigious universities.

“Now we have an illustrious list of more than 60 cosponsoring academic units from 49 universities worldwide. The conference is the product of the commitment of all these cosponsors to academic inquiry and scrutiny of what Hindutva is, says, and does,” the organizer said.

“As our statement on Hindutva makes clear, we define Hindutva as a political philosophy styled after European fascism of the early twentieth century, an ideology that privileges a cult of personality and authoritarian leadership,” the person wrote.

“We believe the founder of Hindutva, V. D. Savarkar, when he makes clear that Hindutva is not the same as Hinduism. Hindutva ideology doubles down on using supremacist tools in the service of a toxic and genocidal unifying theory of a Hindu Rashtra or Hindu nation,” the organizer wrote.

Asked about the backlash from Hindu advocacy groups, the conference host said that they have been aware of Hindutva activity in the US.

“So we expected a backlash from groups that openly identify with Hindutva. Some other groups tend not to openly associate with Hindutva, but have now come out in open defense of the ideology by trying to shut down a conference that attempts to put Hindutva ideology under scrutiny,” the organizer wrote.

“We expected some kind of backlash also because we have seen what anyone who critiques Hindutva ideology gets: reams of online hate, and death and rape threats. We knew we had to be careful about protecting the identities of our cosponsoring units to spare them some of this hate. Of course, now the same Hindutva-linked groups have done the unsafe thing of leaking the names of some of our cosponsors. Thankfully, our cosponsors have responded to the harassment and intimidation by doubling down on their support for the conference. Not a single one of them has backed out.”

The organizer added: “Hindutva propagandists, including Hindutva-affiliated groups in the US, have tried to spin all kinds of bizarre theories of the conference organizers being Talibanis, Islamists, and Left-wing terrorists. They have been using this same tactic to go after others, so again it is not surprising. But it does feel strange to be called all these bizarre names when we have nothing to do with any of these groups…. We are connected to India so we are focusing on the extremist ideology in power in India. We support all academic conferences to understand and expose the harms of any and all extremist and militant ideologies.”