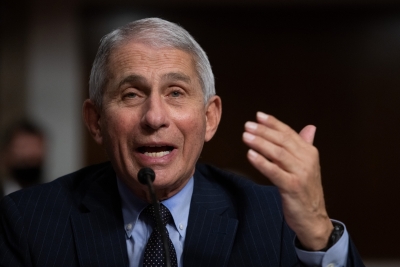 White House Chief Medical adviser, Anthony Fauci has urged Americans to get vaccinated or boosted against Covid-19 as the first US case of Omicron variant was found in California.

“We know what we need to do to protect people. Get vaccinated, if you’re not already vaccinated. Get boosted if you’ve been vaccinated for more than six months with an mRNA or two months with Johnson & Johnson,” he told reporters on Wednesday in a news conference at the White House.

As of November 30, 197.1 million people, or 60 percent of the US population, have been fully vaccinated. And 41.1 million received a booster shot, according to data from the US Centers for Disease Control and Prevention (CDC), Xinhua news agency reported.

As Fauci spoke, California’s health officials announced in a statement that a fully vaccinated traveler who returned to the state from South Africa on November 22 was tested positive with Omicron variant.

“We knew that it was just a matter of time,” he said.

Fauci added that the person was vaccinated but had not received a booster shot and was experiencing “mild symptoms.”

There are currently no other cases the CDC is investigating as Omicron-linked, he said.

White House Press Secretary, Jen Psaki told reporters that President Joe Biden has been briefed on the Omicron variant, noting that he meets with his medical team on a daily basis.

On Monday, Biden called the variant “a cause for concern, not a cause for panic,” saying “we’ll have to face this new threat just as we face those who have come before it.”

The Biden administration moved in late November to restrict travel from South Africa and seven other southern African countries where the Omicron variant was identified.

According to media reports, the CDC was moving to tighten US testing rules for travelers from overseas, including requiring a test for all travelers within a day of boarding a flight to the US regardless of vaccination status. It was also considering mandating post-arrival testing.

The World Health Organization has warned that the risk posed by the Omicron variant is “very high”. More than a dozen countries have detected the variant.