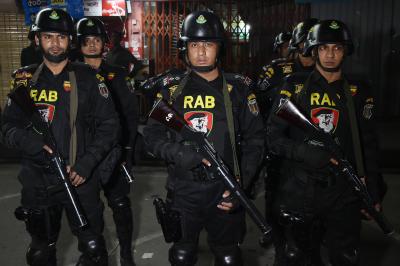 The Treasury said as part of the Bangladeshi government’s war on drugs—threaten US national security interests by undermining the rule of law and respect for human rights and fundamental freedoms, and the economic prosperity of the people of Bangladesh.

RAB is a joint task force founded in 2004 and composed of members of the police, army, navy, air force, and border guards seconded to the RAB from their respective units.

NGOs have alleged that RAB and other Bangladeshi law enforcement are responsible for more than 600 disappearances since 2009, nearly 600 extrajudicial killings since 2018, and torture. Some reports suggest these incidents target opposition party members, journalists, and human rights activists.

RAB is designated for being a foreign entity that is responsible for or complicit in, or has directly or indirectly engaged in, serious human rights abuse.

The US Department of State has announced visa restrictions on Benazir Ahmed due to his involvement in gross violations of human rights, making him ineligible for entry into America.

Responding to the development, Bangladesh Foreign Minister AK Abdul Momen slammed the sanctions, saying the move was “very unfortunate” and “not fact-based”.

“I would expect from (the) US more solid fact-based response,” Momen said on Saturday, ensuring that Dhaka would review if it was an outcome of any “geopolitics”, Xinhua news agency reported.

The Foreign Ministry has also summoned the US envoy in Dhaka, Earl R. Miller, to convey Bangladesh’s “discontent” over the development.

On whether the development could strain Bangladesh-US relations, Momen told reporters: “I don’t think so,” but quickly added that “it depends on the US”.

He said the allegations of gross rights violations by the anti-crime elite police unit were not “based on facts” and RAB was a disciplined institution that instead “has been securing human rights for the people of Bangladesh”.

The Foreign Minister said the US claimed that RAB killed 600 people in 10 years, but “we have no information who were killed”, saying the decision should have been backed by facts.