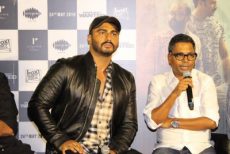 IANS-   Upcoming Bollywood film “India’s Most Wanted” has been granted a U/A certificate by the censor board after directing omission of scenes making a reference to religious books Bhagavad Gita and Quran, said its director Raj Kumar Gupta. The teaser of the Arjun Kapoor-starrer had created a stir with a terrorist citing the Bhagavad […]